We use cookies to give you the best online experience. Please let us know if you agree to all of these cookies.

A Wheely Good Time for the Pigs

The pigs at Patchwork Farm have a new piece of equipment in their pen, allowing young people to control a wheel with food hanging from it.

Lesley Barcock, the Farm Manager, who came up with the idea, said; "The pig wheel was an idea I had to provide some enrichment for the pigs, but I wanted it to be something that the young people here at Chailey could use as well."

Engineer, Martin Langer, made the wheel following Lesley's ideas and drawings. Different food or toys can be hung from the wheel for the pigs to chase, eventually rewarding them with food. Providing the pigs with new ways to feed is important as it helps keep them entertained.

Martin has made the mechanism solar powered and the young people can make it turn by using a switch (a remote button that they press).

The new pig wheel can be seen in action on the piece that ITV news created when they visited Patchwork Farm on Wednesday 25th March. They spoke to students Ellie and Holly, Asisstant Head Teacher Paula Marten, and Farm Manager Lesley. You can watch the video on the right.

The running of Patchwork Farm is funded entirely by voluntary donations. Click here to see ways you can support the farm. 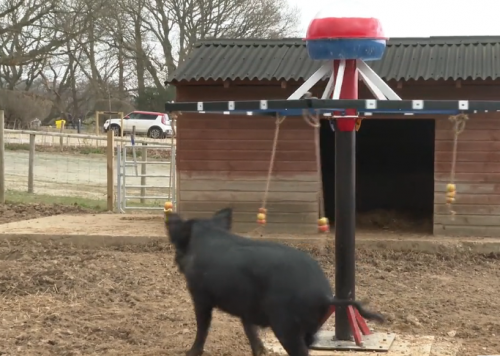