We use cookies to give you the best online experience. Please let us know if you agree to all of these cookies.

Easter Fun at the Holiday Club

Easter Holiday club ran for 5 days over the Easter break, 17 young people attended and took part in a busy timetable of fun activities. For the first time a new club for those over 16 was offered and proved very popular.

School pupils made delicious chocolate Easter eggs, they melted the chocolate, set it in the mould, and repeated this quite a few times to get a really good chocolate egg. To make them even better, some of the children decided to swirl milk chocolate and white chocolate together to get an incredibly cool marble effect.

Young people also had a fantastic silent disco. Everyone had a great dance around to the music, and the young people put song requests in of their favourite music, which made it particularly enjoyable.

Some of the young people also made herb gardens in a big flower pot. They planted, oregano, chives and parsley. And to make it even better – they each decorated their herb garden pots, painting them lots of different colours and fabulous patterns.

There was also some lovely and sunny weather in the week so everyone moved outside to use the water balloon catapult! The aim was to catapult a water balloon at the target, and to see who could the get highest amount of points. It was great fun, and the catapult might have even fired in the wrong direction a few times, ACCIDENTALLY… water ballooning some of the support workers. But it was sunny – so everyone who might have got in the way of the children’s water balloons dried off soon enough.

Young people also visited the tortoises at the farm, who had just come out of hibernation.

We are so pleased that we were also able to offer the 16+ holiday club, which was new this year. The club took on a more youth-club feel and young adults took part in lots of activities including a games day, pizza making, movie afternoon, swimming, and a visit to Patchwork Farm.

Both holiday clubs also took part in a Easter themed treasure hunt which the Easter bunny had kindly put together for them. The young people went off around the whole site, including visiting the donkeys on the farm!

The first clue was ‘Find the ship where your first letter will be’ at each point the young people would find a letter and once they had all the letters they headed to the secret garden to work out what word the letters spelt out… it spelt EASTER BUNNY! The young people then had to find where the Easter bunny was hiding and collect a chocolate egg!

The holiday clubs are a great opportunity for the young people to have fun and spend time with their friends in a relaxed environment. It’s all about having fun so the children and young adults take part in the activities and use their equipment at their own pace. 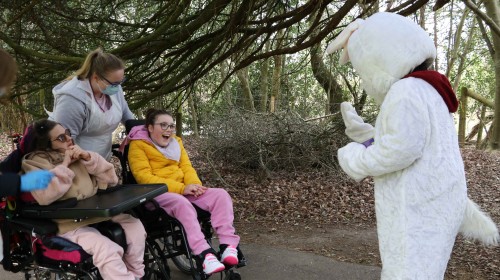