Keeping it in the Family:

Keeping it in the Family: Why Team Turner is pulling out all the stops for Chailey Heritage

The parents of a teenager with a rare genetic condition affecting only around 30 people worldwide are urging the public to back a charity's big fundraising weekend.

Mikey Turner, 17, has been living at Chailey Heritage Foundation for four years after his condition worsened at home.

Mikey, his parents and two sisters are now all taking part in their own challenge events on Sunday May 31. And they are asking the public to join in as well, raising much-needed funds for the Charity, which is based between Lewes and Haywards Heath.

Chailey Heritage's annual fundraising event Focus 10k, due to be held on Sunday May 31 at Borde Hill Gardens, had to be postponed because of the Covid-19 crisis.

But now, the Charity wants people to take part in their own sponsored 10k, 5k or mini mile on the same day, or any time until June 14.

Any money raised will be match funded by Focus Group, based in Shoreham.

Mikey’s Dad, Andrew, said: "Me, my wife, our two daughters and Mikey are all joining in, and we urge everyone to as well. As a family of five, we will each be completing two tasks on the Sunday May 31. One daughter who's in Australia at the moment, will be planting melons for 5k. Mikey's two challenges are to be in his stander for ten minutes and also to complete a 5k bike ride onsite at Chailey."

It was at the age of around three that Mikey’s parents, Andrew and Jenny, thought something may be wrong. Mikey appeared clumsy at times and there were problems with his speech.

His parents invested in a purpose-built house at Rusper, between Crawley and Horsham, to help look after Mikey but when his condition worsened four years ago, he moved into Chailey Heritage Foundation.

Mum, Jenny, 56, said: "Chailey Heritage has been an absolute lifeline for us. We were really struggling back in 2016. Mikey's needs had become more and more complex and he required a team of eight carers to provide care 24/7. When we first visited Chailey, we were both struck by the very positive ethos, and now it feels like home from home for Mikey”.

She added: "We regard Chailey Heritage as an extension to our family. The staff are amazing and there is huge trust between us and all those who care for Mikey."

Dad, Andrew, 59, said: "We see the excellent care that Mikey receives and have huge admiration for the role of all the staff. We were struggling with Mikey but the last thing on our minds was that he might have to move to be cared for. It was a huge step for the family and the feeling when we got into the car and left Mikey at Chailey was a dreadful one. But we could not provide the quality of life that Mikey needed”.

At Chailey Heritage, with the help of the specialist team, Mikey is able to take part in a wide range of activities including swimming and IT lessons. Mikey's condition was undiagnosed for many years, which made it hard to plan for his needs.

Even now with a diagnosis, planning is hard as he is one of so very few with this condition and being one of the eldest, neither his family nor the team at Chailey know what to expect.

Mum Jenny said: "He communicates with a subtle nod of his head but he has lost the ability to laugh, cry or smile. He was due to come home for a four-day Easter holiday but that was put off because of the coronavirus and staff said he felt very low that it wasn't happening.

We haven't seen him now for nine weeks and that is extremely difficult. He normally comes home three times a month and we make sure that is real family time. We would all like to say a heartfelt thank you to everyone at Chailey Heritage Foundation."

One of the ways the Turners would like to show their appreciation for Chailey Heritage is to take part in the charity’s fundraising events and they are looking forward to the alternative Focus 10k and 10 Stay event.

Nina Gopal, Chailey’s Head of Fundraising, said: "We are naturally very disappointed that, like so many events, our annual Focus 10k has been impacted by Covid-19. But like many other charities, we are still in need of funds so we decided that the event could still take place but in a different way. The government is now advising people that they can take unlimited exercise with social distancing, so why not take part?”

Nina added: “The challenge is to complete your own 10k, 5k or a mini mile for the younger ones and seek sponsorship. If you don’t want to run, you can still join in by devising your own challenge connected to the number 10. 10 bunny hops, 10 press ups or 10 laps of the garden - the important part is to stay safe and have fun raising much needed funds for young people like Mikey.”

Any money raised will be match funded by Shoreham based communications provider, Focus Group. Joint Managing Director, Chris Goodman, said: “Teamwork is at the heart of what we do, and we’re delighted to be supporting the Chailey team! Of course, we’re disappointed that the event can’t go ahead as planned this year, but we hope our pledge to match fund the money raised will help with the incredible work done by this local charity.”

To sponsor the Turner family,  or do your own challenge and set up your own JustGiving page at www.justgiving.com/chs To find out more about the 10 Stay, go to https://www.chf.org.uk/Focus10K-update.html. 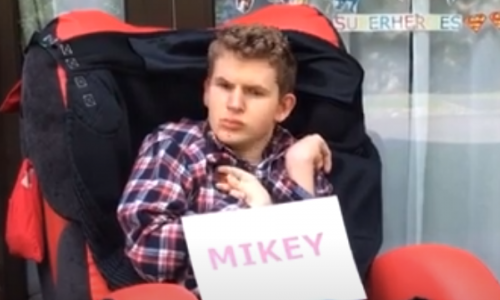